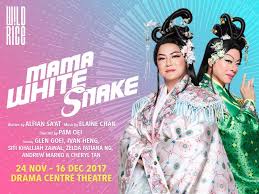 I have never watched doyennes Glen Gooi or Ivan Heng on stage, despite having read rave reviews about their performances over the decades (Glen Gooi’s last stage appearance was in 1987!), so I am grateful for the invitation to the Charity Performance of Mama White Snake, now playing at the Drama Centre.

Mama White Snake is based on the clasic folk tale, Madam White Snake, of which there have been many adaptations. I watched one such movie as a child, and was part-fascinated and part-frightened. (And this was before a terrifying close encounter with a snake that affected me so much that I do not even dare look at an image of a snake to this day.)

Thankfully, the only snake-props in this musical are soft toys (two small green snakes on a stick and a huge white snake behind a counter), even though I still had to avert my eyes (and shutting them on one occasion).

Glen Gooi is Mama White Snake and Ivan Heng is Green Snake. Of the other four main actors, I’ve only watched Siti Khalijah Zainal (as martial arts master Fahai) in a few past prodections. I thought Zelda Tatiana Ng (as his wife, Mdm Ngeow) was Pam Oei (the director) at first, as her acting, singing styles and inflection are very similar to Oei’s (whom I’ve watched in many productions). It is the first time I’ve heard of Cheryl Tan (as Mimi, daughter of Fahai and Meng’s love interest) and I love her voice. I’ve read that Andrew Marko (as Meng, son of Mama White) won the Straits Times Life! Best Award  earlier this year, and I’m suitable impressed. Children make up the rest of the cast; they are all very cute and adorable, singing and dancing with gusto. I’m most impressed by a tiny tot whom I hope will continue to pursue his passion in the performing arts when he grows up.

There is only disappointment in this playful (and sometimes hilarious) retelling of a classic tale (of a young man who suffers an identity crisis when he discovers that his mother and her best friend are not who he  has always believed them to be) – the extended displays of martial arts, wushu stunts and sword-fights are too drawn-out; there could have been more rife, cheeky humour and stitch-inducing jokes instead.

Still, it is a heartwarming story about growing pains and home truths and what makes a family; and I enjoyed the many delightful original songs by Elaine Chan (who is almost always the musical director in all the performances that I’ve attended). The stunning costumes are clearly inspired by gorgeous Chinese opera.

In fact, I bought a ticket to this musical as soon as I heard that Adrian Pang would play the lead. The second reason was that Dick Lee, whom I’ve long admired, would write the music.

Adrian Pang indeed carries the show well. He is able to capture Mr Lee’s distinctive inflections, mannerisms, gestures and gait. He is simply excellent. He is convincing in his role, portraying a character at once feared and admired.

Much have been said  in the newspaper reviews that Sharon Au is the “weakest link”, that the delivery of her dialogue feel “clumsy and unwielding”. that she is a “shadow” of her character, that her singing is “thin” as she struggles with the musical segments. I beg to differ. I think she is commendable despite a broken ankle. She did her voice trainer and vocal coach proud.

Of the supporting cast, I think Sebastian Tan is the most impressive. He is such a natural, and a surprised welcome change from his Broadway Beng persona.

The musical score by Dick Lee was absolutely charming. I am in awe of this man’s talent and musical prowess, despite his claims that he “never passed Grade 6 music theory”.

Kudos to the set-designing and production team. The superb three-storied set and multi-media projections are top of the class.

The only part I did not understand how it fits is when the second act opens with a song containing slick cheography by a shimmering, smartly-dressed five-men ensemble.