It was conducted by Joshua Tan and featured violinist Loh Jun Hong.

This concert, sponsored by Singapore Press Holdings, was widely publicised, and I expected the response to be overwhelming. As the complimentary tickets would be issued one hour before the concert, I timed to be one of the earliest to arrive. Yet, the queue snaking the entire foyer of the Victoria Concert Hall spilled over onto the road outside when I arrived ten minutes after tickets were issued. (I got ticket no 176.) I wonder how many of those who arrived just before the concert commenced were turned away.

Excerpts from Pictures at an Exhibition  (Mussorgsky)

The short pieces in this (piano) suite are linked by a series of Promenades which need no introduction. I especially liked the alto saxaphone in The Old Castle and the percussion in Tuileries. The orchestral arrangement by Maurice Ravel has turned the piano suite into a  concert-hall showpiece. The pizzicato passages are especially glorious.

Nocturne from String Quartet no 2 (Borodin)

This is one of the best loved tunes, particularly the theme sung by the cello. When the violins came in, I imagined I was floating among the clouds; then I was dancing with the fairies and was unwilling to come down after the finale.

This is the moment I’d been waiting for: Loh Jun Hong, whom I’ve not seen in a live performance since he graduated from the Yong Siew Toh Conservatory of Music (YSTCM) several years ago. (He has since graduated with a master’s from The Julliard School, performed all over the world and is a part-time lecturer at YSTCM.) He plays on a $300,000 (at least) rare 1726 Mezzadri on generous loan from the Rin Collection for this concert.

In this lively movement, both the harmony and melody are equally predominant, and so are the highly challenging technical passages. I believe I read somewhere that this piece was considered ‘unplayable’ even by some professional violinists; so imagine how impressed I was by Loh’s performance. I was awe-struck the moment he put his bow to violin and played the first note. His technical prowess and mastery of the violin aside, Loh’s passion and commitment to both the music and performance was evident and clear. He was Singapore’s best bet in the finals of the inaugural Singapore International Violin Competition in 2015, but, shockingly (as he has finished top in international competitions before) his journey ended after the semi-finals.

Flight of the Bumble-Bee (Rimsky-Korsakov)

This is one of the most famous classical pieces ever written. I used to play this on the piano. And I still love this piece, but by this time at the concert, I was experiencing serious gastric pains (as I had only had a small bun since I woke up at 5.30am, and it was now almost 1.30pm), so I did not enjoy it as much as I would have.

Suite No 2 for Small Orchestra (Stravinsky)

Stravinsky originally wrote this as four piano pieces for his children to duet at the piano but later arranged it for an small orchestra. By this time, even Joshua Tan was perspiring profusely (as could be seen from the wet shirt clinging to his back as he conducted). The character of the piece is amusingly off-kilter and quirky. The raucous and lively rhythms bring it to a captivating conclusion. Tan’s enthusiasm and energy came through in spades but the musicians played with a serious demeanor on their faces. Perhaps they were feeling like me – loved the music but feeling terribly hungry! 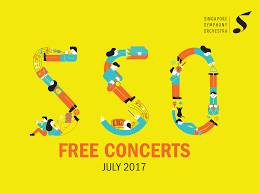 Sponsored by Singapore Press Holding’s Gift of Music Series, the Singapore Symphony Orchestra (SSO) performed a lunchtime concert today at the Victoria Memorial Hall. Perhaps due to the publicity, the queue to enter the hall was already quite long (I estimated about 200 people in front of me) half an hour before the commencement of the concert. It was presented and conducted by the Associate Conductor of the SSO, Jason Lai. 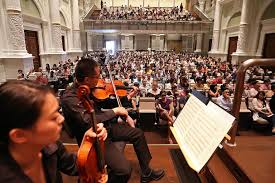 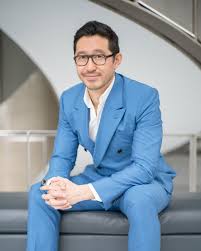 The opening piece is the endearing Morning Mood from Edvard Grieg’s Peer Gynt Suite No 1 Op 46. The music depicts a sunrise over a desert after Peer Gynt is stranded in Morocco by his friends, and he is sitting in his tree using a branch to defend himself against a group of monkeys. I was immersed in the sunny, beautiful dawn until baby’s cries and people coughing spoiled the mood!

Johannes Brahms’ Third Movement (Poco allegretto) from Symphony No 3 in F Major Op 90 is Lai’s favourite. It is a lullaby meant to soothe, but it also has a seriousness to it, combined with a sense of romance that is truly beautiful. It is also slightly different from most lullabies as it is in a minor key. I love the beautiful cello solo passage that gets repeated and dressed differently. The middle section highlighted the winds, and listening to the colours and sounds is just an incredible experience!

The next treat is a preview of a concert in next April, to commemorate the 100th Birth anniversary of the composer Leonard Bernstein. Selections from West Side Story today include I Feel Pretty, Maria (my favourite of the day), Something’s coming, Tonight, One Hand, One Heart, Cool and America. I especially liked the harp and violins singing the melodies before being joined by the entire string section and then the whole orchestra, ending on a high  and triumphant note. Mr Lai himself was a delight to watch – his beautiful, expressive body language and gestures was simply infectious!

Another pop concert in the works (in August) is Ennio Morricone”s Cinema Paradiso. The excerpts played today are: Theme, First Youth, Love Theme. For me, the best part was the opening with a long solo passage played by the piano, before the violins then the rest of the strings joined in. (How come it didn’t sound as lovely when I played it on my piano?)

The final piece of the day was Manuel De Falla’s Ritual Fire Dance from El amor brujo. The music, depicting the worshipping of the fire goddess and dancing by the fire has a fiery and Oriental/tribal flavour. Pianist Shane Thio succeeded in making the piano sound like the percussion instrument that it is. Despite three curtain calls , there was no encore as the concert had exceeded the stated duration. Most in the audience would have to scurry back to work.

The Singapore Symphony Orchestra (SSO) performs over 50 concerts a year. Yesterday’s concert gave us a glimpse of what the orchestra will be playing at its European Tour next month. The works they will play in Berlin, Munich, Dresden, Mannheim and Prague also include at least a concerto for the cello and two concertos for the violin. Touring is important because it raises the orchestra’s profile and gains prestige.

Despite a heavy downpour, a sizeable crowd showed up at the Yong Siew Toh Conservatory Concert Hall (at the National University of Singapore) yesterday afternoon. It played three pieces:

Verklarte Nacht (Transfigured Night), Op. 4 (1943 version) by Arnold Schoenberg (1874-1951) This was originally written for a string sextet when Schoenberg was 25 years old, but later adapted for a string orchestra. The piece tells of a poignant conversation between a man  and woman  as they walk through a ‘bare, cold grove”. A leitmotif system is used to identify the woman, man and narrator (violin, viola and cello) thematically and to reveal their various emotional states.

Der Rosenkavalier, Op. 59: Suite by Richard Strauss (1864-1949)                                                    Strauss wrote more than 50 operas, and this one is a crowd pleaser as it is a colourful piece. The Suite (“To The Night of the Rose”) provides a bird’s eye view of the whole opera, containing orchestral adaptations of the introduction, the Presentation of the Rose, a waltz, brief excerpts from trios and duets, a series of sumptuous Straussian climaxes, and a quick waltz bringing it to a rousing end. It is an awesome piece. There is such energy and fervour that conductor Lan Shui’s (Music Director of SSO since 1997 and Cultural Medallion receipient) baton flew off his hand towards the percussion sessiion. It was retrieved and passed back to him later by a violist. Whether he had a baton or not, Shui was able to coax the sound he wanted from the orchestra: be it charm, majesty, flamboyance, grandoise or  full of joviality, swaying, lilting or soaring. With the pleasant melody, it was my favourite piece of the day.

Amidst calls for an encore, “Bravo” and a standing ovation, the orchestra obliged with a buoyant piece that brought the concert to a triumphant end.